I hit the Trail yesterday looking for some Green Arrow Arum spadix – the flowering part of the plant. Now, why I would be looking for this? Because the Treasure Coast Natives blog has wonderful post about how the fragrance of the spadix and it’s cover, the spathe, change over time in order to trigger certain responses from the fly which is the key to the plant species survival. Click on “Come Eat My Pollen . . . “ and the article will open in a separate tab.

The spadix is the white stalk which is surrounded by by the spathe.

Here is a shot showing a little fly which looks like the Elachiptera formosa referenced in the Treasure Coast Native post.  (Rick, I hope my fly ID is correct)

While photographing the Arum, I spotted an orchid growing in the same wet soil.  Toothpetal False Reinorchid is common throughout Florida but still makes a nice addition to the Trail.

As I was walking back to the car I came on a Bobcat who was kind enough to wait until I could get the camera and take a shot.  After the Bobcat headed into the undergrowth I spotted a second Bobcat, but that one didn’t linger to get his/her portrait taken.

Somebody made the Trail a little more passable.  Saw Palmetto branches were cut back and laid on some of the muddy places. 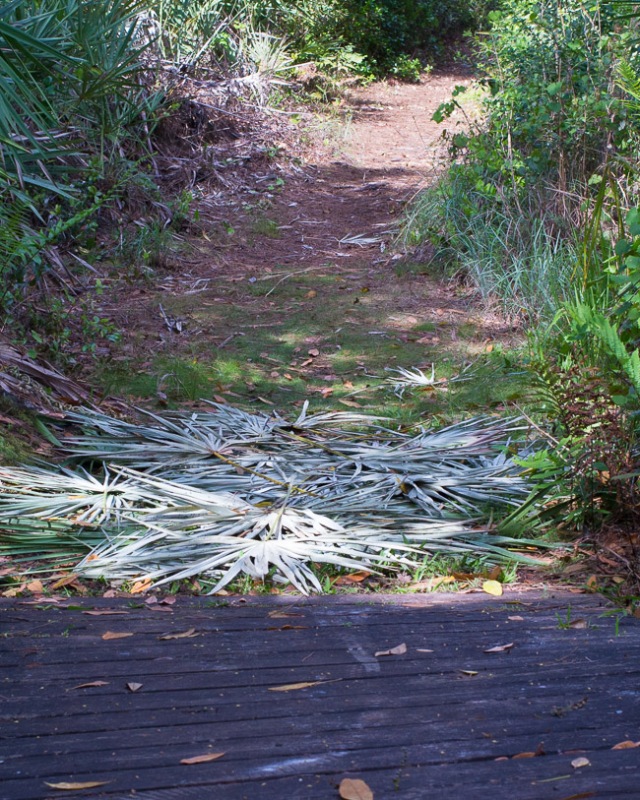 I missed getting a shot of a Ground Skink as it was just too fast.  But I did get a shot of this anole although he was doing his best to hide on the bark of a Slash Pine tree. 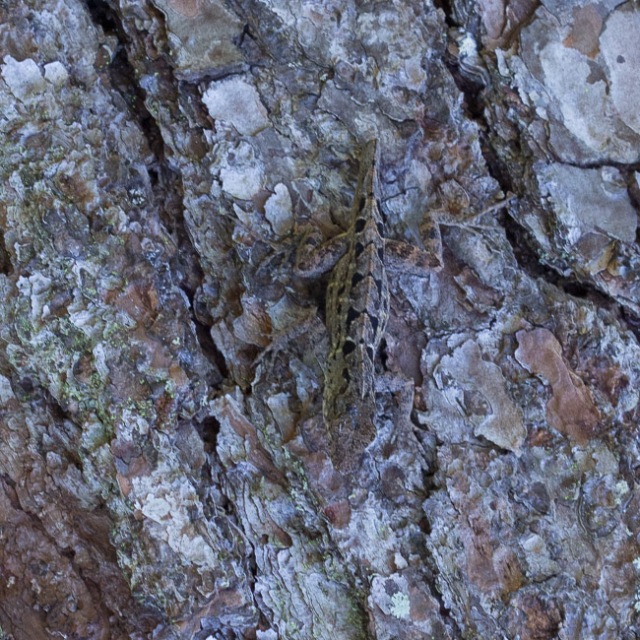 String Ferns were hanging from their home on this Saw Palmetto.

And down by the Creek I found a couple of fiddleheads of the Giant Leather Fern.

Here is a closer view of the fiddlehead – the patterns in Nature never fail to amaze me.

While walking the Trail it is hard to miss the rather large fern arising from the boots of the Cabbage Palm trees.  Lift up the leaf and you will see the spores of the Golden Polypoidy arraigned in 2 rows next to the vein. 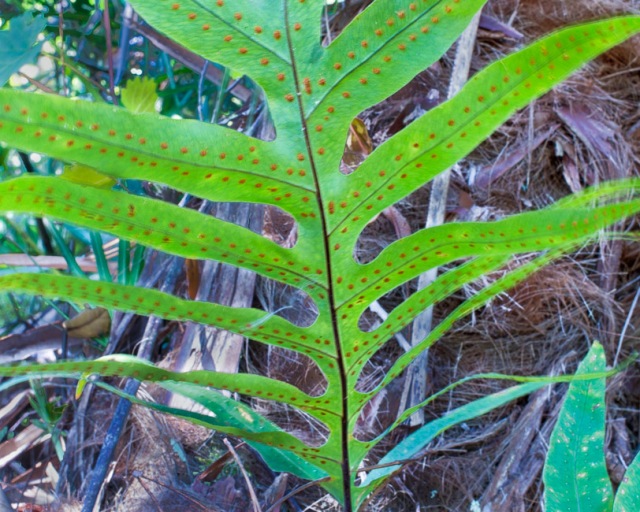 But be most careful on this part of the Trail

For here lurks the shoe tree just waiting to reach out and grab your footwear.

Since I haven’t done a blog posting in awhile I decided it was time to stroll down the Trail and take some pictures.  I recently acquired a new smaller camera and a new small lens and I needed to test them out.  See what you think.

Sunlight was illuminating the air plants that covered the Live Oak tree. 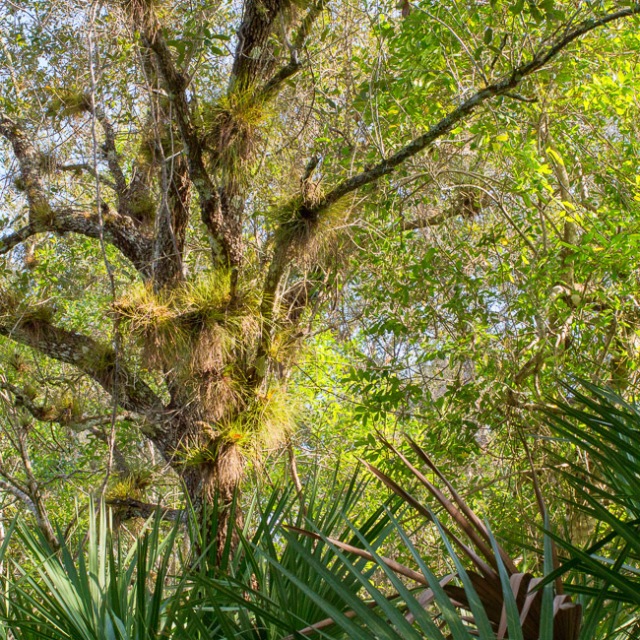 As I love the texture of the bark, I thought the oak was worth another look.

The Spanish Moss appeared to have a golden glow in the sunlight. 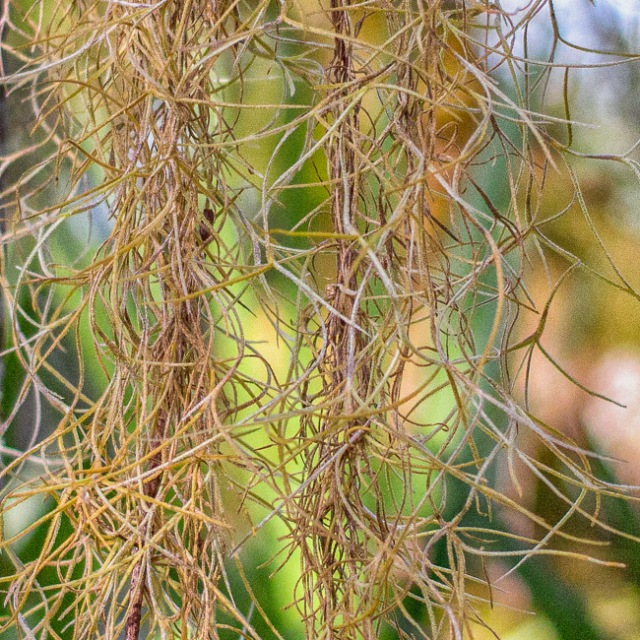 As did the Turkey Tails on the tree.

A half dozen species of wildflowers were blooming.  Some of the Twinberrys, a member of the Coffee Family, were in flower.

Here is a Twinberry bud and, if you look along the right edge, you will see the twin red fruits looking like small match heads.

I was really pleased with the performance of the new camera and lens and was happy to get back on the Trail.

Add another plant species to the list, some Swamp Sunflowers are out in bloom.  Big beautiful flowers that have really thin opposite leaves. 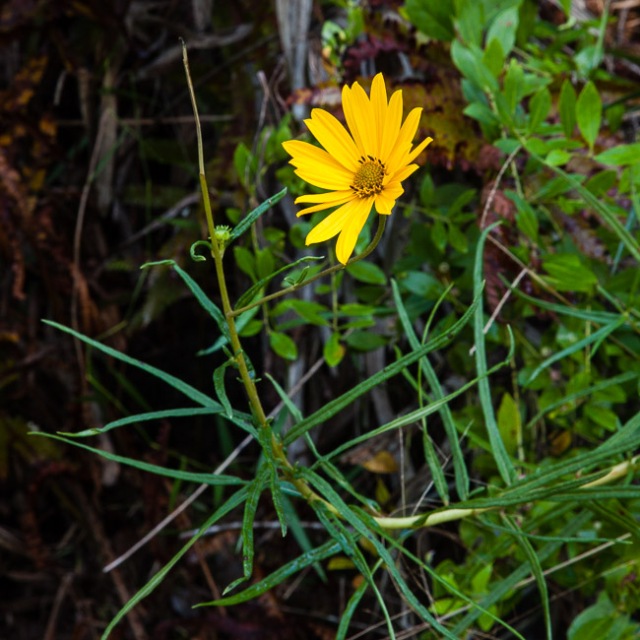 But what really grabbed my attention was the fungi starting to grow on the leaves of the Staggerbush.  Back in April, I posted a picture of what I thought was a gall on a Staggerbush leaf. 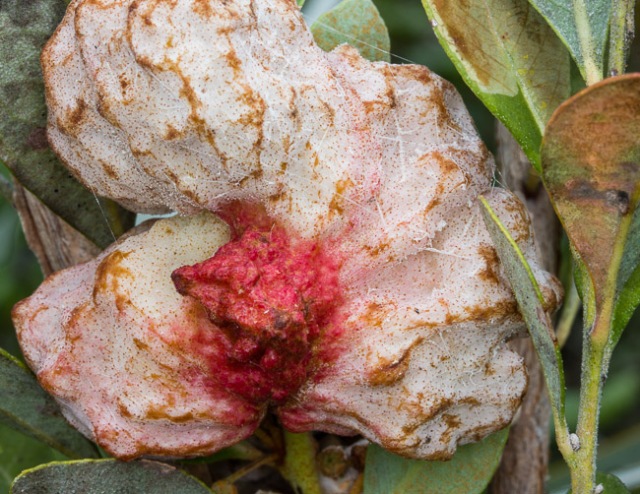 Fortunately,  Rick Walker spotted my blunder and thus I learned that it is actually a fungus causing the growth.

The pathogen belongs to the Exobasidiaceae, a family which consists of 5 genera and 56 species. The species have a wide distribution, especially in temperate parts of the world.  They grow on the leaves of plants, especially those in the Ericaceae (Heath family).  Generally one species of the fungi is associated with on species of plant which may be why they show up on the Staggerbush and not on Fetterbush.

If you look close you can see the little thread-like micorrhiza on the surface.  So it was with some interest that I spotted this fungus starting to grow on the leaves of another Staggerbush.  You can see the leaf with the fungi starting to surround it. 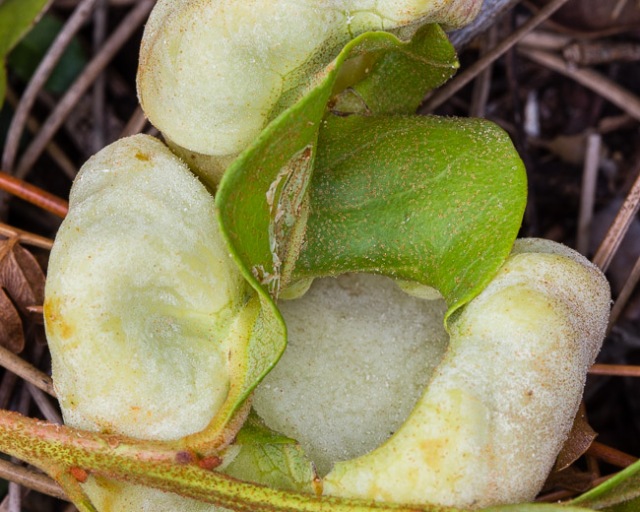 The threads of the micorrhiza remind me of a spider starting to weave a web.

This is the view from the other side of the leaf. 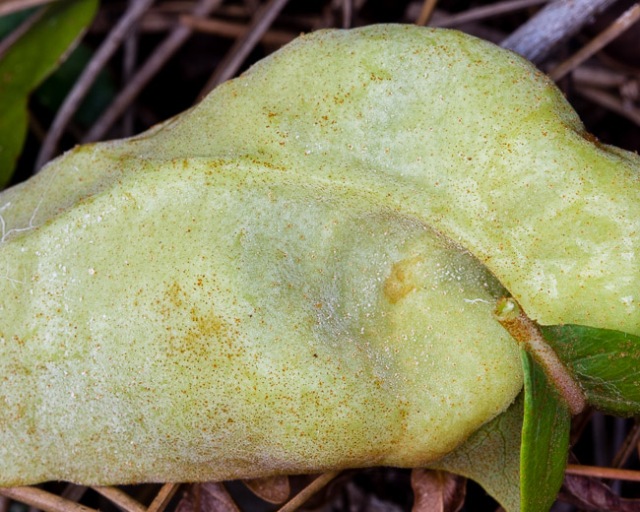 It’s always interesting to see some of the weird and interesting shapes we can find in trees.  I’m amazed that this oak could survive the damage it sustained when the limb broke away.

The digital age has opened up a multitude of ways to present your images to the public.  And many of the ways are free.  The blog you are reading does not cost me a cent and enables me to share the images I see along The Trail.

Many image-storing sites are free or have a very low cost.  For $30 a year I can store thousands of plant and fungi images on a site called Blue Melon.  The images can easily be downloaded and used by anyone.  They are stored in folders that are labeled with the scientific name of the plant of the plant or fungi family.  If you want to take a look, the address is: http://www.bluemelon.com/poaceae/

If you are trying to identify a plant found in one of the conservation areas of Martin, Palm Beach, or St. Lucie Counties take a look at: http://tcplants.org   This is actually 7 free sites linked together.  The main site has a tutorial designed to guide you through the identification process.

My first exposure to Word Press was setting up a free site that enabled my friend and mentor George Rogers to share some of his fascinating botanical information and for me to post a few plant pictures.  For anyone not aware of this blog, it is a great read.  Here is the link:  http://treasurecoastnatives.wordpress.com 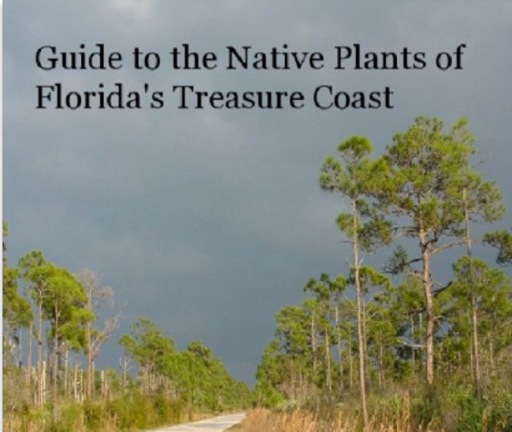 Looking through the images I’ve taken for the A Trail To The River Blog, I decided to put a number of the images into an eBook and offer it as a free download.   Here is the link:  http://store.blurb.com/ebooks/442716-a-trail-to-the-river 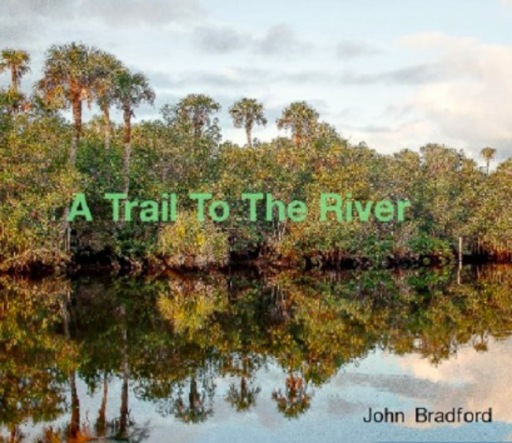 As I wander the Trail I always look to see what is flowering and, near one of the wooden walkways, I noticed that the Climbing Hempvine is starting to open up.  It’s in the Aster or Daisy family and its flowers are all disk flowers just like Feay’s Palafox.

A Hog Plum had dropped it’s colorful fruit on the trail.   I’m surprised that it hasn’t been gobbled up by an animal or bird.

The weather has been wet so fungi are appearing.  I spotted this one near a tree root which crossed the Trail.

When I turned the mushroom over I saw the sponge layer of tubes which meant that it was some species of Boletes.

I broke off a little piece at the edge to give a little picture of the tubes where the spores are produced.

Further down the trail I came on an old mushroom that was covered with a cottony mold.  Everything is the host of another organism.

Lining the banks of the river are the leaves of the Giant Leather Fern.

Here’s a closer look at the spores which cover the underside of the leaves.

Look up and you will see another fern, Golden Polyploidy, hanging from the limb of an Oak tree. 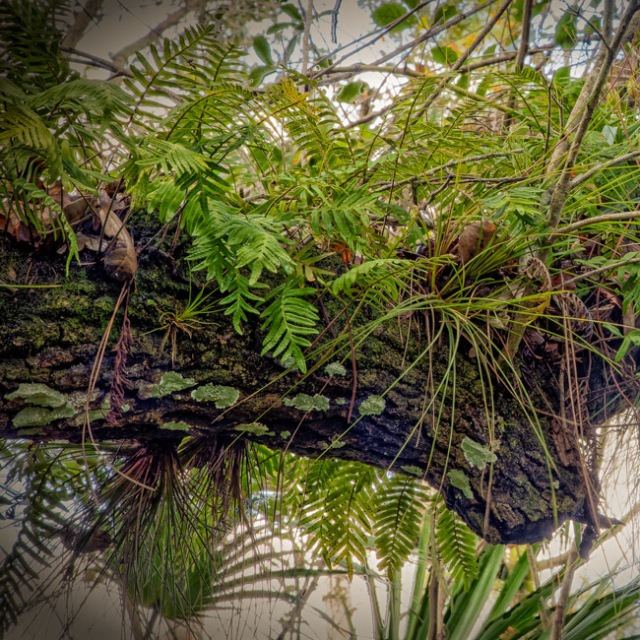 An Oak also provides a home for the Southern Needleleaf air plants.

And finally, for a bit of color, here is the flower of the Sensitive Briar vine.

If you are tempted to reach out and grab the flower, better think twice.  Here is a closer look at the sharp bristles along the stalk.

While strolling down the Trail I started noticing that some of the oak leaves were rolled up.

I took a closer look. 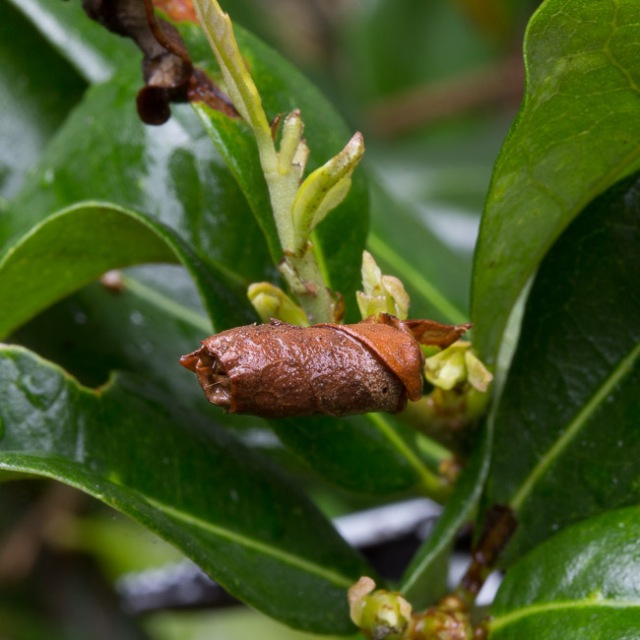 I looked at the end

And I cut it in half and looked

Then I started searching the Internet in hopes of finding what sort of creature rolled the leaves.  And what I found amazed me.  In this blog I normally try to keep words to a minimum but this rolled leaf provides such a fascinating example of a complex genetically-determined behavior that I just have to share.

The leaves are rolled by a weevil to provide a nest for its eggs.  The following is a quote from a University of Florida article which fully details the process:

“The leaf is measured by stepping it off “so many paces up – so many paces over.” Beginning from the margin, the leaf is bitten across to the midrib. The midrib is nearly (but not quite) severed to cut off the water supply to the lower half of the leaf. The attack then continues on the other side of the midrib. If the leaf is later to be cut completely off and dropped, the cutting continues to the opposite margin of the leaf. If it is to be left hanging on the tree, the cutting is discontinued a short distance past the midrib.”

This is only the first step in the process.  Here is a link to the article and I hope that you will read about the rest of this amazing behavior under the Life Cycle and Behavior section.

The Trail is constantly providing new and interesting plants.  Last week a Snake-mouth Orchid of Rose pogonia popped up. 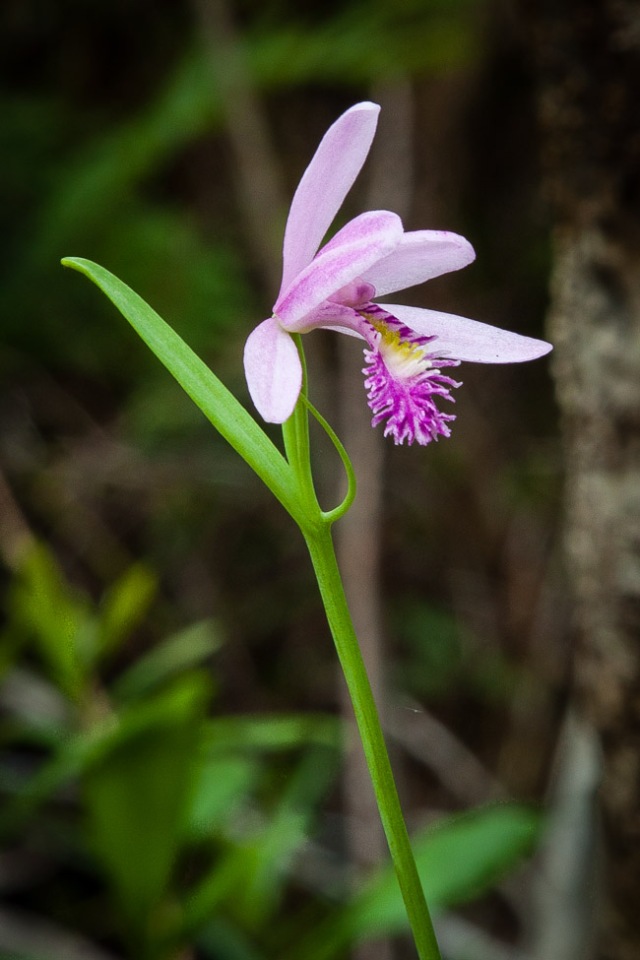 I keep looking up at the branch of one of the Oak trees because I found the leaves of a Florida Butterfly Orchid.  It usually flowers in June or July but can flower anytime and I want capture the image when it does.  For now, all I can show you are the long drooping leaves and the whitish pseudobulb at the base.

Lately, I’ve gotten really interested in mushrooms – photographing and identifying them, not eating them.  So when I spotted this one I stopped to take the shot.

It is thick-skinned puff ball that doesn’t have a common name.  Unfortunately, the scientific name (Rhopalogaster transverarium) doesn’t exactly roll off the tongue.   And it’s not all that photogenic on the inside.

A Trail to the River
Create a free website or blog at WordPress.com.